Why the Volkswagen Golf is So Popular

Alongside the Volkswagen Beetle, the Golf is most of the popular cars ever, as iconic to younger generations as the Beetle was to their parents and grandparents. But why does the Golf retain such a loyal following and enthusiastic fan base?

Today, we’re going to figure out why the Volkswagen Golf is so popular. 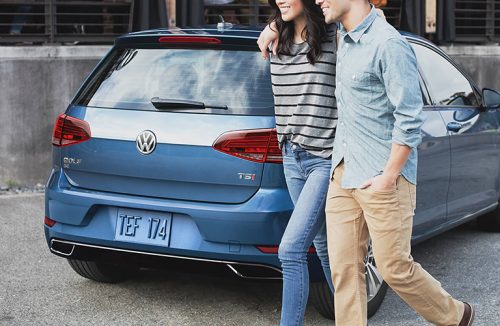 Before the Golf appeared in 1974, hatchbacks existed, but they weren’t remotely as popular then as they have been since the late 70s. This is due, in large part, to the Golf. Or as it was originally called in the States, the Rabbit. Unlike many cars from older decades, the Mk1 Golf still looks fantastic, and its easy to see why the design became (and has remained) so loved.

The Golf earned its famous performance-based GTI badge in 1976, just two years after the production of the original Golf began. The original GTI had a fuel-injected 1.6L engine that pushed out 108 horsepower and had a top speed 113 mph. In the same year, Volkswagen also released a 1.5L diesel engine Golf which boasted 36.2 mpg, making the it one of the most fuel-efficient cars available in the 70s.

In the contemporary market, manual transmissions are being phased out with multiple variations of automatic transmissions. However, the Volkswagen Golf has always been a driver’s car. Every year of Golf produced has had the choice between automatic and manual transmissions. Those who aren’t comfortable with driving stick don’t have to worry about tearing up a clutch or transmission, while those who love the feel of manuals have never had to give it up.

In 2002, the Golf got a new badge: R. Originally called the Golf R32, this racing version of the Golf touted the highest-powered engine ever put in a Golf, as well as standard AWD. The Golf has always been popular due to its incredible performance and handling, and this iteration only improved upon that.

What to Drive a Golf for Yourself?

Here at Hall Volkswagen, we have a huge new and used selection of the Volkswagen Golf ready to go. Give us a call to schedule a test drive.

Already have a Golf and want to trick it out? Take a look at our selection of genuine Volkswagen accessories!

What are the exterior color options available on the 2021 Volkswagen Golf?

What is VW Travel Assist?

Is Volkswagen discontinuing the Golf?

This entry was posted on Monday, October 28th, 2019 at 5:00 am and is filed under Brand Info, Brand Information, For Fun, Golf Alltrack, Golf GTI, Golf R, VW Golf. You can follow any responses to this entry through the RSS 2.0 feed. Both comments and pings are currently closed.